So you are planning a vacation to Disney World in March 2015? Lucky you! March is a wonderful time of year to visit the “happiest place on earth”. The temperatures begin to moderate, the flowers are in full bloom and the park hours are extended. Keep in mind that this is the month that crowds begin to pick up as all of us people with school-age children who live in snowy places (like my state of Colorado 🙂 ) flee the cold over Spring Break to soak up some of the Florida sun. 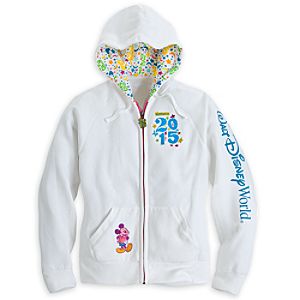 The weather in Disney World during March can be beautiful. The average high is about 78 degrees, the average low is about 54 degrees and the average rainfall is about 4.01 inches. March is the fifth rainiest month of the year with generally mild temperatures. Hurricane season has not yet begun, however there are the occasional severe storms with tornadoes during this time of year. Remember that although it can reach the upper 70’s by afternoon, low 50’s waiting for the bus in the morning can be very chilly, especially given the high humidity levels in Florida. When traveling in March, I always pack a couple of Disney hoodies to keep me warm in the mornings and evenings.

March typically begins with moderate crowds and by mid-month when a lot of schools begin their Spring Breaks, the crowd levels become high. With Easter occurring fairly early this year (April 5), the crowds are anticipated to pick up the weekend of March 14 and 15 and to continue to be high the rest of the month.

With bigger crowds comes longer hours at the Parks. As the month goes on each Park stays open later.

For specific hours on each day during March, please click this link. Remember that park hours are subject to change and are often extended during the busier seasons.

Another terrific part about visiting Disney World in March is the Epcot International Flower & Garden Festival. This year the event will run from March 4 – May 17 and features over 100 topiaries, interesting gardening demonstrations, beautiful flowers, weekend music concerts and several outdoor kitchens serving delicious foods and beverages. For more information about the Epcot International Flower & Garden Festival, please check out this article.

For an exciting St. Patrick’s Day celebration, head over to Raglan Road Irish Pub & Restaurant in Downtown Disney for music, food, and fun. For more details, please check out this article.

Periodically throughout the year, Disney closes attractions for refurbishments and enhancements. Here are the scheduled closures during March (subject to change without notice):

If you are traveling to Disney World in March 2015, your planning is probably well under way at this point. Here’s a checklist to make sure you are on track:

If you haven’t already made your March 2015 reservations, Disney has some great offers going on right now!

To take advantage of these incredible deals, please click the image below and fill out the form to receive a quote from my friends at Destinations in Florida.

Any planning questions or tips? Please leave a comment!