More news out of D23 Expo for fans of AVATAR! Walt Disney Parks and Resorts Chairman Bob Chapek gave lucky fans a behind-the-scenes look at what’s to come at Disney’s Animal Kingdom. He was joined by Imagineers as well as legendary filmmakers James Cameron and Jon Landau who shared new details about the expansion including information about the new E-ticket attraction. 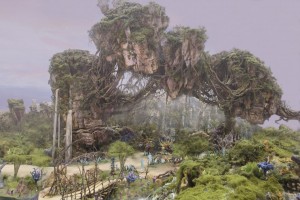 During the session, Imagineer Joe Rohde said one of the things that has made work on this project so special has been the collaboration with the Oscar-winning team behind the film – James Cameron, Jon Landau and the rest of the Lightstorm team.

“We’ve been working side-by-side with Jim and Jon to make sure that what we do is true to the story, characters and vision for the beautiful, mythical, epic land of Pandora,” Joe said. “We’re creating a transformational experience that you’ll remember for the rest of your life.”

As part of the largest expansion in the park’s history, Disney’s Animal Kingdom will immerse guests into the mystical world of Pandora, and the entire park will transform after dark, offering guests longer days than ever before to experience this one-of-a-kind theme park.

The new themed-land, Pandora – The World of AVATAR, will give guests the opportunity to journey into the magnificent world of Pandora – a world that includes floating mountains, a bioluminescent forest and the winged creatures known as Banshees, giving guests a transformational experience they will never forget.

The new E-ticket attraction centerpiece of Pandora, AVATAR Flight of Passage, will allow guests to soar on a Banshee over a vast alien world. The spectacular flying experience will give guests a birds-eye view of the beauty and grandeur of the world of Pandora on an aerial rite of passage.

Check out this video to get a sneak peek of what’s headed our way at Animal Kingdom!

When will we get to experience all of these incredible new additions to Animal Kingdom, you ask? Well, Disney has not released an official opening date yet. Rumors are that Disney has hit several delays with this project and we could be looking at a late 2017 or early 2018 opening. This could work nicely with the currently scheduled release of the film AVATAR 2 on December 25, 2017. Stay tuned, and I’ll keep you posted with updates as more information is released!

Do you love AVATAR? Which part of the land are you most excited about?
Please leave a comment!

2 comments on “The Latest On Pandora – The World Of AVATAR”